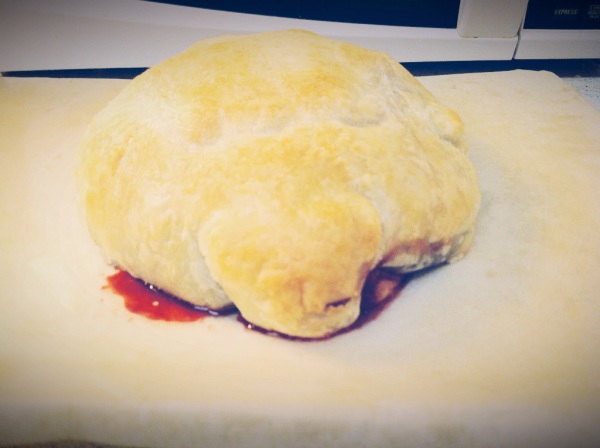 Happy Halloween! How are you celebrating Halloween? I don’t normally celebrate it too much and haven’t pranced around in a costume to do some trick or treating since I was a teenager. Nowadays I go out to eat, or like this year, decided to cook something spooky and traditional. This year I made Irish Halloween Bread (Barm Brack) from WineBarrelGourmet and Baked Brie Brains from Macheesmo. Head to their blogs for the recipes.

I was hoping to get some trick-or-treaters at my place so that I could give away the candy I bought, but we are left with a bag of Hershey’s miniature mix and a bag of fun-size pretzel M&Ms. Do any of you want them?

Baking Barm Brack is an Irish tradition and when I saw the recipe, I had to try it because I love Irish Soda Bread and wanted to try to make another traditional Irish bread. Also, I love dried fruits in bread and this is a very fruity bread where you soak the dried fruit (traditionally raisins and currants) in black tea. I used dried cranberries and a jumbo raisin medley. However, I accidentally forgot to drain the dried fruit and actually added the 2 cups of black tea in the dough. I got a very wet dough, so I ended up adding about 1 1/2-2 cups of flour to make a slightly sticky dough. Thus, I ended up with 2 loaves, but it turned out very well. It wasn’t as fruity as it should be and because I altered the proportions of the ingredients it was not traditional, but it was good!

After rising for about 2 hours the loaves are ready to go in the preheated oven. I put the free-form one on a baking stone on the bottom rack of the oven and the loaf in the ceramic pie dish on the top rack. At about 20 minutes into the baking time, I had to put the bread in the ceramic dish to the bottom rack. It took about 50 minutes to bake at 400 degrees F.

Beautiful! The barm brack cooling down. The free form loaf had more of an oven spring. 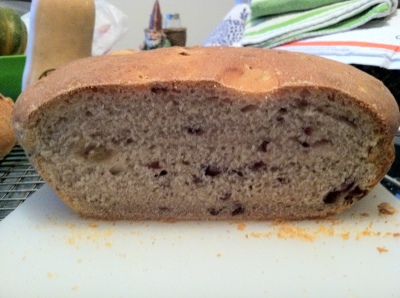 Here’s the crumb shot. Tight holes, soft and very pleasant texture. I really liked the taste too. Just a hint of sweetness. We ate it with lentil stew. 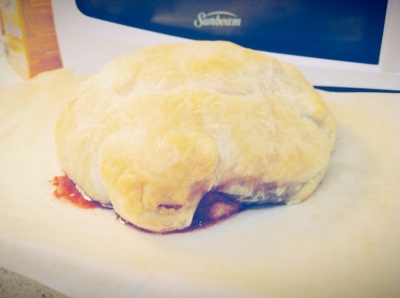 Now for the Baked Brains. This was an easy and fun recipe. It might be fun for kids too. A great Halloween appetizer because it is both spooky and tasty. I assembled everything about 2 hours in advance, wrapped it in plastic wrap, and put it in the fridge. It turned out good, but I think by doing it ahead of time, moisture develops inside and maybe makes it wetter. Also, maybe I cut into it too early so it dripped more, but anyways taste is most important and it was not lacking there. 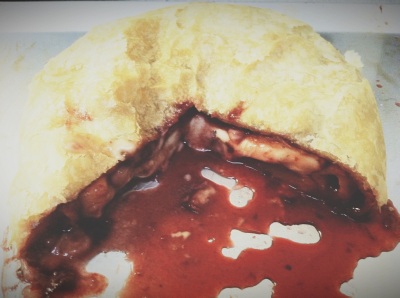 Oooooh! Look at the dripping brie brains and cherry jam blood! Crazy looking and reminiscent of brains, but crazy good!

A Jack-o-lantern of my sister’s dog Bella! She carved it. Awesome!

Hope you all enjoyed your Halloween!