We all have our favorite holiday foods. Some of my favorite holiday side dishes are green bean casserole and brussels sprouts with apple and bacon.What are yours? Why not have those holiday dishes on a pizza? Using the skillet-broiler method for making pizza, that’s what I did recently and had some fun with holiday side-dish inspired pizza.

The skillet-broiler method is my favorite way to make pizza in a home oven because you don’t have to preheat the oven (you use a cast-iron pan instead of a pizza stone) so it is a quicker method of cooking pizza and the result is close to a traditional Neapolitan pizza cooked in a wood-burning stove (let me know if you know of any other home methods of getting close to the Neapolitan style). Try it some time and see how you like it. Serious Eats has a great article on it:  skillet-broiler method.

Feel free to experiment with your favorite side dishes and let me know what you have tried or want to try. Here are two of my favorite holiday dishes on a pizza: green bean casserole pizza and brussels sprouts, apple, and bacon pizza. 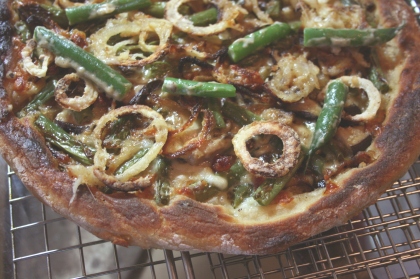 Here’s the green bean casserole pizza. Got some char on the cornicione reminiscent of the result you get from wood-burning or coal ovens. Actually, I was cleaning some dishes and almost forgot about the pizza. I like the crust a bit lighter, but it was still finger-licking good 🙂

A slice of festive pizza pie. Complete with the crunchy bits you get in casseroles too! lol I guess it tasted better than it looks. 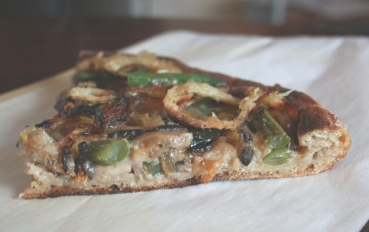 Side shot…The green bean casserole recipe is courtesy of Alton Brown. His recipe is all from scratch, including the cream of mushroom soup and French fried onions. It is pretty darn good.

Number of servings will vary according to pizza size

Some nice bread hole structure. Air pockets in bread is a good thing.