Being a Philippine-American, I am naturally drawn to Mexican culture and cuisine as Philippines and Mexico share customs and traditions dating back to some 400 years. If you are interested in reading about the Mexican-Philippine cultural relationship, check out this article. Many  traditional Mexican dishes (non fast-food ones) that I have had remind me of Filipino home cooking and comfort foods. The first time I ate cochinita pibil at a Mexican restaurant, it reminded me of a pork dish that my dad would cook. Though there are some differences in ingredients used (for example:  Filipino adobo refers to a meat stew cooked in a vinegar & soy based sauce and Mexican adobo involves dried and/or smoked chiles), something about Mexican food transports me to my family’s table. I can feel the warmth and care put into making the dishes in the same way that my parents and other relatives do with Filipino food.

Since my husband is recovering from a nasty cough and it has been a bit cloudy outside last week, I made  Oaxacan-style chicken and masa dumplings (mole amarillito con pollo y chochoyotes). This orange-red colored mole is not usually what you would think about when talking mole. Probably the most common is the mole poblano or mole negro that involve chocolate and a slew of other ingredients and spices. There are several types of mole originating in Oaxaca and other states in Mexico, but this mole amarillito isn’t very complicated and doesn’t require so many ingredients. It is easy to whip up and is  full of flavor, I guarantee it! END_OF_DOCUMENT_TOKEN_TO_BE_REPLACED

My friends, family and I love to go out to eat at Italian restaurants and I never seem to tire of it. Especially the pasta dishes (and maybe tiramisu as well). How about you? My husband and I have eaten at several great Italian restaurants in San Diego, our hometown of about 3 years. Our favorites are Antica Trattoria and Osteria Panevino (our dog loves eating there with us too!). My husband likes to eat pasta and cooks it really well too. The first meal that he cooked while we were dating was a salad and a vegetarian pasta dish (as I was a vegetarian at the time), like a pasta primavera. I was impressed. Today, pasta is a staple in our home.

We had a bunch of pork shoulder stored in the freezer so I decided to grind it up and make sausage out of it. I left it loose and did not stuff it into casings so I could cook a really interesting dish:  pasta with wine, saffron and sausage (also known as pasta al vino, zafferano e salsiccia).   END_OF_DOCUMENT_TOKEN_TO_BE_REPLACED

I’m feeling mean green today. In sixth grade, my friends and I would do silly things and one of the things that I did (among other crazy kid things) was perform rap songs. To my friends, I was once “The Mean Green Rapper Crapper” because I was a wannabe rapper and my favorite color was green. So silly, but those were the days of being crazy kids. I was influenced by those times as I was developing a new muffin recipe and an accompaniment to it. I was thinking of using green things that are good for your insides so that they do their job well (LOL yes, alluding to my former rap name). I love zucchini bread and muffins, but wanted to use a different green veggie. Cruciferous kale is big nowadays, so I decided to try it out in a muffin recipe along with banana, apple, and pineapple, which are often found in green smoothies. When I wanted to stop my coffee and caffeine addiction a couple of years ago, I started having tea or a green smoothie instead, often with kale and a few fruit pals. Moreover, I love matcha green tea in green smoothies so I added it here in this recipe. The pistachios are a nice addition as well. Going with the green theme, I also made pistachio milk, which, when paired with these green smoothie muffins, is a mean & green, yet delightful combo. 😀 END_OF_DOCUMENT_TOKEN_TO_BE_REPLACED 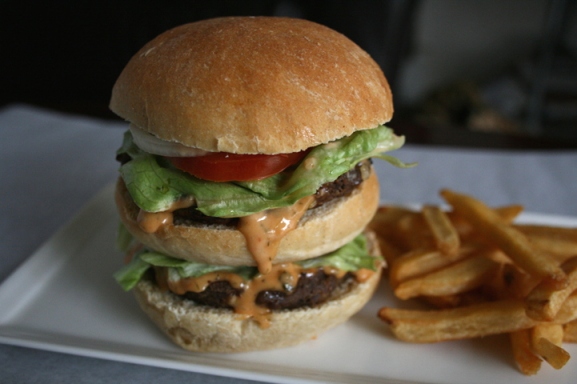 Yes, we are going vegan today. Like with many dishes, I am not afraid to try different variations on the theme whether it be vegan, vegetarian, flexitarian, or carnivorous versions. There are only a few burgers that I haven’t liked and that’s mainly due to culinary execution.  I’ve had the common beef, turkey, and salmon burgers in addition to boar, buffalo, elk and my favorite–Crazee Burger’s alligator burger with fruit & curry tapenade. So I’m always on the quest for a good burger, including the vegetarian or vegan ones. I grew up eating veggie burgers and have enjoyed them throughout the years, but this vegan double-double burger is my new favorite burger. END_OF_DOCUMENT_TOKEN_TO_BE_REPLACED

“You’re only a dog, old fellow; a dog, and you’ve had your day;
But never a friend of all my friends has been truer than you alway.”
– Julian Stearns Cutler