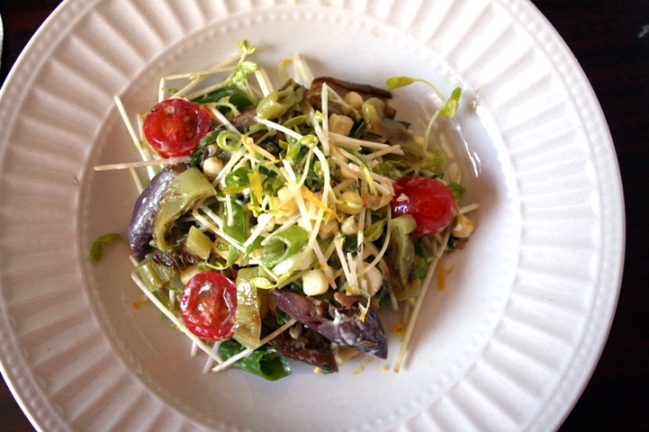 There’s a backlog of drafts that I will be posting in the next week or so. “So many ideas, but so little time!” That’s how life can be, so I’m going with it. Been back in a lab doing lab things and learning a lot. It’s fun! Besides being in the kitchen, I love being in the lab. For those of you who work in a lab, doesn’t it seem that labs are synonymous with working long hours? I’m studying for the biochemistry subject GRE too. Anyways, back to the food, a dish that can be prepared when you are especially busy. Last month, I came up with a surprisingly delightful slaw of sorts that features some of my dad’s garden goodies. 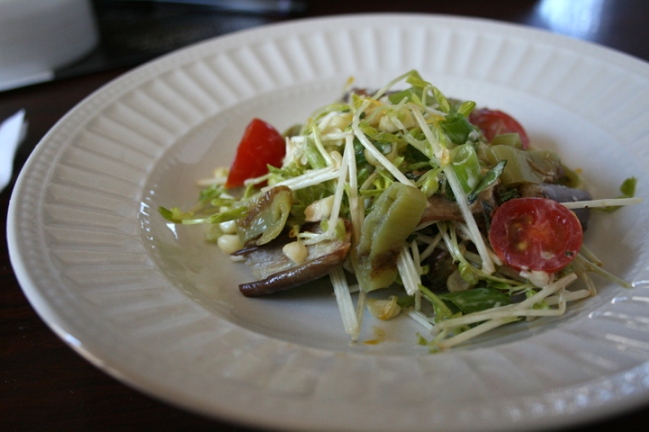 It’s not a traditional slaw with cabbage, but the garden veggies when paired with the crisp pea shoots and creamy dressing makes you feel like you are eating a slaw, so I call it a slaw. There are both grilled, cooked, and raw components that hit you with a barrage of textures and flavors…in a good way. It’s a dish with some Filipino influence, especially with the calamansi and fish sauce in the dressing. If you don’t want to use fish sauce, you can use your favorite umami booster (vegan ones too!) such as a bit of miso, soy sauce, dried shiitake mushroom powder, nutritional yeast, liquid aminos, etc. What’s your favorite umami booster? 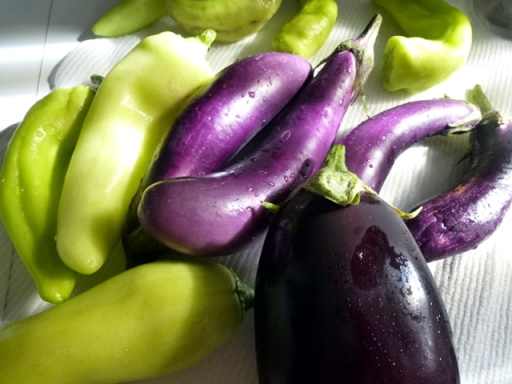 In addition to some great peaches, calamansi, apples, cabbage, and other produce, my dad grows banana peppers and eggplant (both regular and Japanese eggplant varieties). If you are a regular reader, you know that I often talk about my dad’s garden. 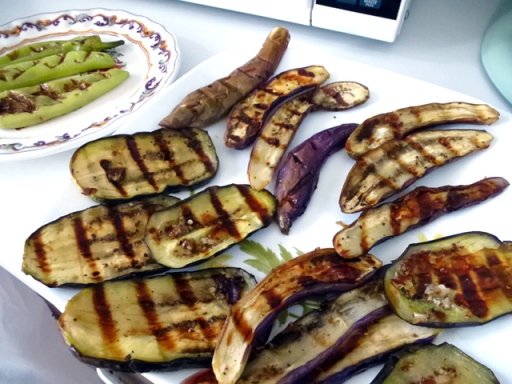 I love eggplant! Several of my readers know that! I sometimes don’t understand how they cannot be liked. It’s rich, earthy, meaty, and complex. This vegetable/fruit? was one of the first ones that I learned to cook. Here, I’ve sliced them  1/4 inch thick and grilled them until they got some nice and brown caramelization marks. You could also roast them in the oven 400 degrees F 25-30 minutes (flipping every now and then), until golden brown. 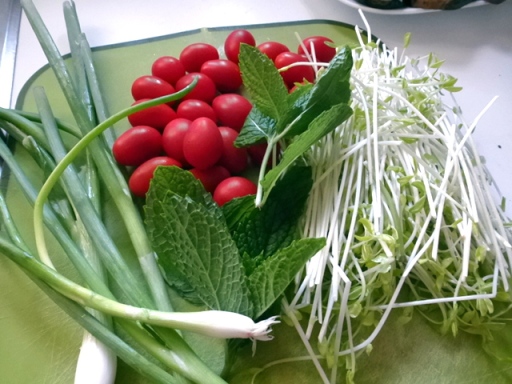 MMmmm…garden tomatoes that you can pop in your mouth as well as some crisp green onions for the slaw. I got some good mint leaves and pea shoots at the market. Sorry that the corn isn’t photographed. 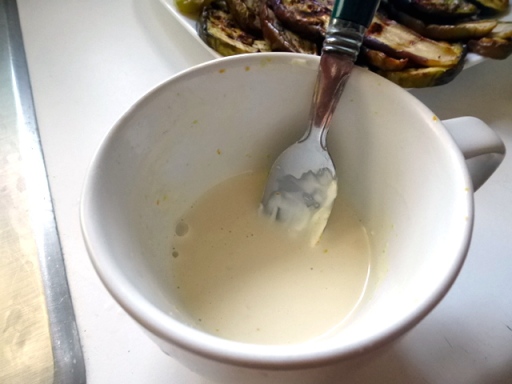 This slaw dressing is also not traditional as it features fish sauce as mentioned above, but it does have some mayo, which is commonly used in slaw. It highlights the calamansi citrus fruits picked from the tree. Make this ahead of time and cool in the fridge for at least an hour to let the flavors meld. I recommend using a really good organic mayonnaise brand with a great taste. Homemade mayo would probably be better yet! For a vegan mayo recipe, see my Vegan Double-Double Burger post and make the spread, but omit the mustard, ketchup, relish and dill. 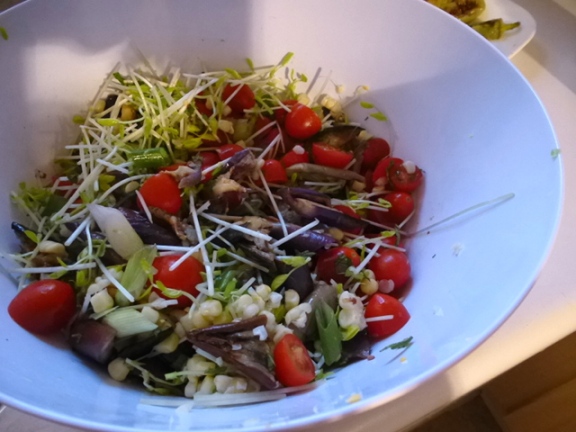 Like any other slaw, once you finish prepping the vegetables and the dressing. Just toss them all together! You can garnish with more green onion and mint as well. This may also be good study food, but it is definitely colorful! 🙂 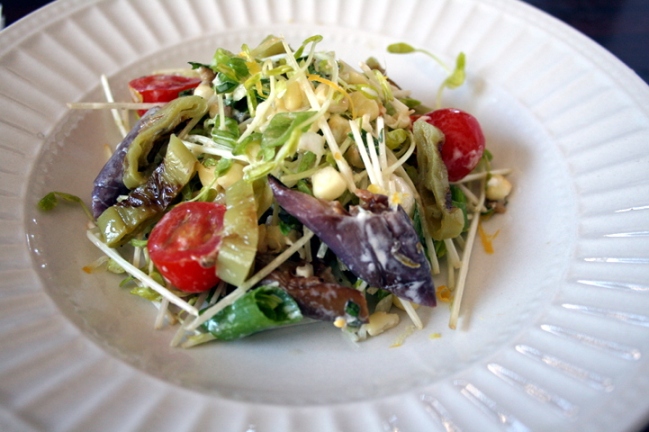 Mix together:  2-3 tablespoons good quality mayo + juice of 2 calamansi (or 1/2 lemon or lime) +  zest of the 2 calamansi + Sriracha sauce to taste (optional) + 1/2 tablespoon fish sauce (optional) + salt and pepper to taste. Add 1-2 tablespoons water (enough to thin out the dressing a bit). Mix again until fairly homogenous. Keep in fridge in a covered container until needed. 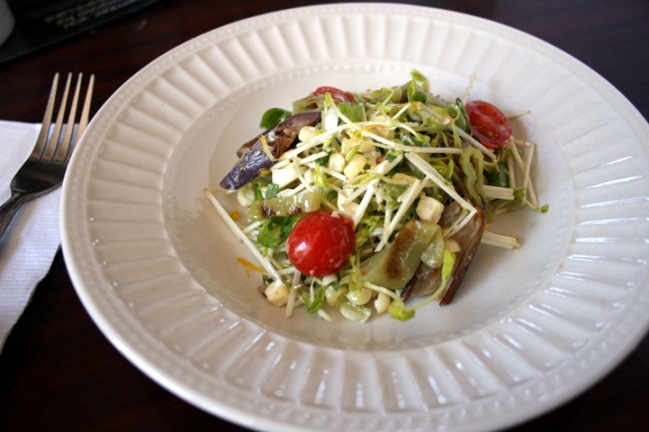 I first made this dish on the fly for dinner and wanted some veggies to go with some chicken that I made. I’m really surprised how bright and summery it is and how every flavor and texture complemented each other. It’s more of a summer dish, but you can customize it for what’s in season, I bet. Of course, you can make this even if you can’t get garden varieties of these ingredients.  I think this or a slightly-altered version of this slaw will be a go-to dish for busy times such as when I’ve been in the lab for a long time.