Happy Purim! After we had dinner yesterday, I remembered that this Jewish holiday had started (ends this evening) so I decided to make something for lunch today. Jewish holidays usually celebrate with specific dishes, which are delicious and comforting. Lunch today was another comfort food dish, a traditional Purim dish called kreplach, which are dumplings, also known as “Jewish wontons.”

The filling for the dumplings is meat-based, often brisket or chicken. Though non-traditional, I used ground turkey and added some chopped greens (Power to the Greens) mix from Trader Joe’s. You can use any greens you want, or just leave it out.

Pretty easy filling. Just brown some onion and ground turkey, then turn off the heat. Add the greens and the residual heat will cook wilt them down.

I could eat this filling just as is! It’s reminiscent of Filipino giniling. But you have to grind it up for the dumplings. 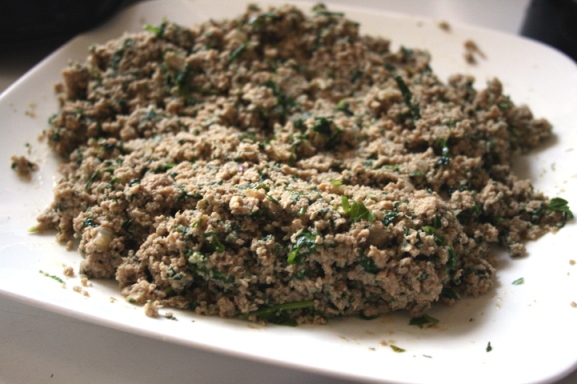 I used a blender, but a food processor or meat grinder works well. You want to process the filling with some broth or water until the consistency is like a paste or very similar to baba ganoush. Then it is ready to assemble the dumplings! 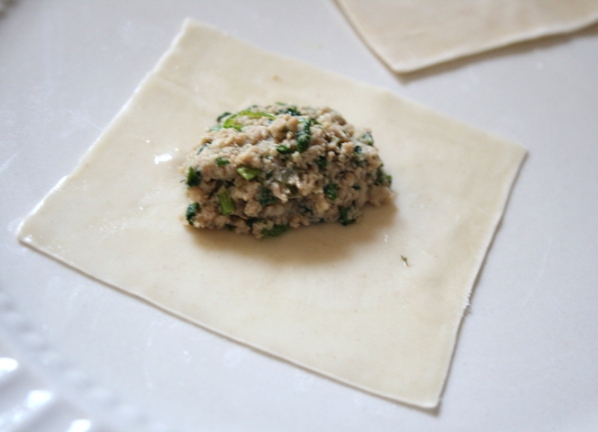 Shhhh…don’t tell anyone that I used wonton wrappers. The kreplach dough is very similar to pasta, but I had no time to roll out dough, so this time I used a shortcut, which I think is fine sometimes. Put about a teaspoon in the center of the wrapper, then wet the edges with water, and fold! 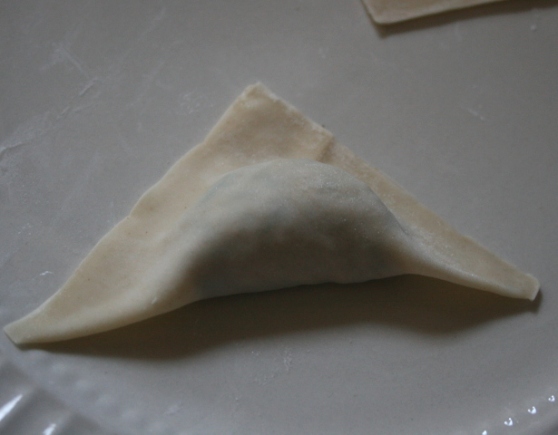 This is the basic triangular shape kreplach. Make sure to press out excess air and seal it well. Do not overfill or the kreplach may burst when they cook. 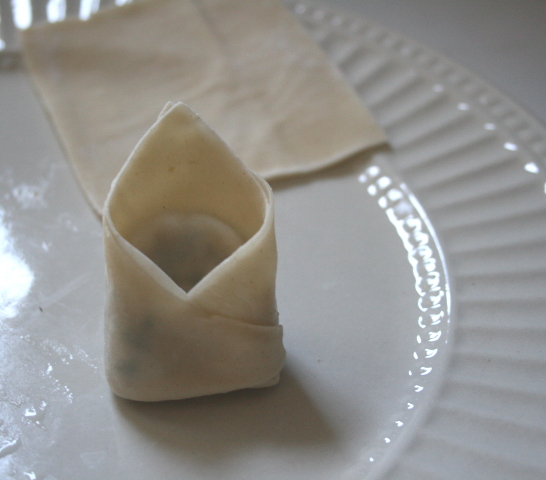 For a hat-like shape, put a finger in the middle and wrap around the sides. Pinch and seal with water.

For the tortellini-like shape, instead of wrapping the sides parallel to the top point as in the hat, wrap the sides opposite the top point, pinch and seal! Sorry if it seems confusing, but I hope the pictures help.

For a shape similar to hamantaschen, use a circular shaped wrapper and just gather up the edges and seal.

Looks like a hamantash, which I made last year.

These dumplings, depending on the thickness of your wrappers, takes about 5-10 minutes to boil in chicken (or turkey) stock. I pretty much followed The Shiksa’s kreplach, but just browned some ground turkey and added about 2 cups of chopped greens. Plus, I used wonton skins. For the recipe, click over to The Shiksa in the kitchen . 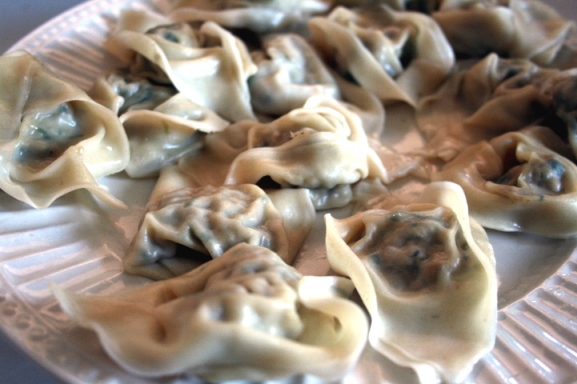 7 thoughts on “Turkey and Greens Kreplach”