Sometimes you can’t help but be angry or irritated. It just happens. Some stupid little mistake can make you blow a gasket. You just want to scream! There have been times where I have reached for that bag of chips or box of cookies when I am upset about something, but I’ve found another cure for the bad mood — kale-granola aka “kale-nola”!

Cooking and baking, in general, tends to lift my spirits and transport me from bad-temper-opolis to the land of the calm. Making this kale granola was a fun experiment to reduce some stress.

I’ll tell you right away that this isn’t for the kale-phobic (like my husband). If you don’t like kale, look away. If you are kale-philic, enjoy kale chips, or gravitate towards kooky, quirky foods like I tend to do, then read on! ;D

I used kale from the farmer’s market. I just love chatting with the people and learning more about the produce that they stand behind. I don’t like to buy kale from anywhere else. It just tastes better than those found in the  supermarket, in my opinion. As for the kale-nola, you could put anything you would normally put in granola like dried fruit, nuts, coconut, cacao, whatever you want! For this batch, I went relatively simple and did a cherry chia version with slivered almonds and dried coconut. I like to use raw nuts here because I don’t want them to brown much in the oven.

Ground vanilla beans are a new staple in my pantry. They give you that flavor without adding any extra moisture that vanilla extracts do

Speaking of moisture, the glue that holds this granola together is a dried fruit paste. In this picture, I blended some dates, but it was a bit to liquid-y. You want it to be a paste. Think thick like mortar.

You want to massage the kale leaves with the other ingredients. Make sure the dried fruit mortar envelopes every little bit. Kale benefits from a gentle massage. Flavors penetrate better that way. Once everything is combined it then goes on a parchment or silpat lined baking sheet and into the oven! 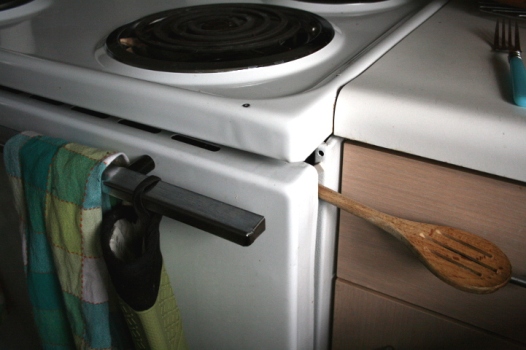 But…. you want to keep the oven door ajar when you bake the kale goodies so extra moisture can escape and let the leaves dry out and be crunchy. Before you know it, you’ll have some crazy green granola! 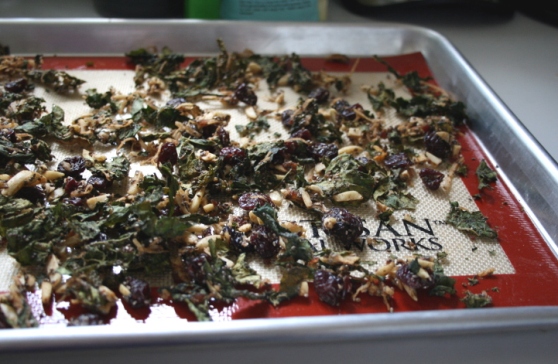 It looks odd, but kind of intriguing. I love it! I really like loud and crunchy snacks. For me, it hit the spot. Addictive. 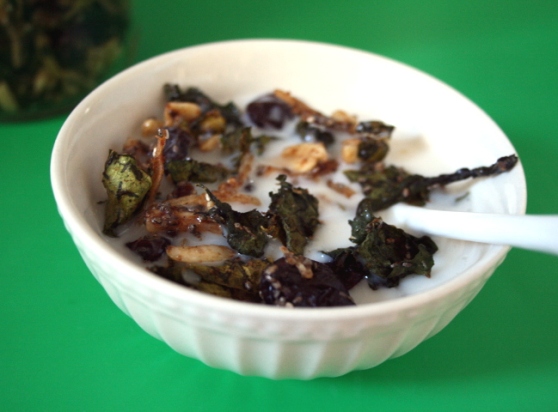 Kale-nola is good on its own, but pour on your favorite milk and it’s something else. Best bowl of cereal that I’ve had in a while. I don’t even like cereal. 🙂