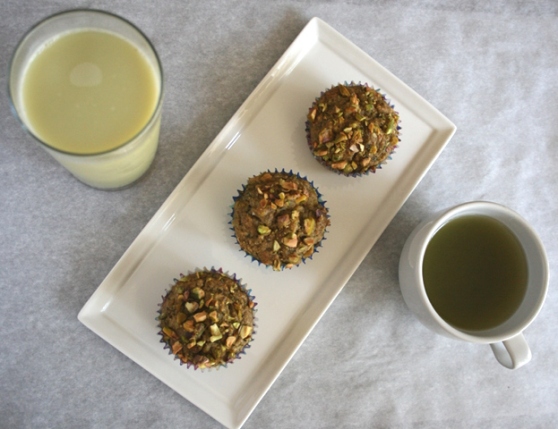 I’m feeling mean green today. In sixth grade, my friends and I would do silly things and one of the things that I did (among other crazy kid things) was perform rap songs. To my friends, I was once “The Mean Green Rapper Crapper” because I was a wannabe rapper and my favorite color was green. So silly, but those were the days of being crazy kids. I was influenced by those times as I was developing a new muffin recipe and an accompaniment to it. I was thinking of using green things that are good for your insides so that they do their job well (LOL yes, alluding to my former rap name). I love zucchini bread and muffins, but wanted to use a different green veggie. Cruciferous kale is big nowadays, so I decided to try it out in a muffin recipe along with banana, apple, and pineapple, which are often found in green smoothies. When I wanted to stop my coffee and caffeine addiction a couple of years ago, I started having tea or a green smoothie instead, often with kale and a few fruit pals. Moreover, I love matcha green tea in green smoothies so I added it here in this recipe. The pistachios are a nice addition as well. Going with the green theme, I also made pistachio milk, which, when paired with these green smoothie muffins, is a mean & green, yet delightful combo. 😀 END_OF_DOCUMENT_TOKEN_TO_BE_REPLACED