Popovers for Passover? Never heard of them until about a year ago when my Grandma-in-law gave me a recipe for it after we were all full from eating the really good food that she made for Passover seder last year. After getting that recipe, a few days later, I tried making them and they turned out to be delicious. Actually, they are “delectable” as Martha Stewart would often describe the food she was tasting on TV. This recipe is from a Martha Stewart episode on Passover years ago. These popovers are made from matzo cake meal, which I also used in the mocha brownies. The procedure is pretty straightforward. It’s like making choux pastry. Though you do have to make sure to cool down the dough before adding the eggs. Doing so somehow contributes to the light and airy texture of a popover. They rose well after 15 minutes of baking. I didn’t peek before the first 15 minutes so the rising action didn’t get interrupted as in most other popover recipes. I think you can bake these in a popover tin, but I haven’t tried that yet. I liked the cream-puff-esque shape from baking them on a pan. Okay, after writing about them now I want to go eat one!

Really nice popover structure, I think. If you have had matzo crackers, there’s a toasty flavor to it, which you can taste in these popovers. They kind of reminded me of a gigantic mandlen soup nut, but breadier.

Goes well with matzo ball soup. The matzo ball here is huge and is the same size as the popover 🙂 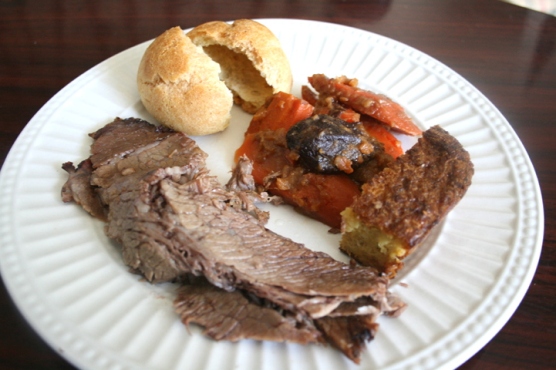 They are also a great accompaniment to the main dish.

adapted from a Joan Nathan recipe for Martha Stewart

Ingredients  (make sure all ingredients are Kosher for Passover)

To me, it’s fun to break open a popover. Don’t you think so?

Then you can fill it with something yummy if you want! In the left half is apple-walnut charoset used as a filling and on the right half is chopped liver. Ok I admit, I love chopped liver. When the topic of chopped liver comes up, my husband sometimes jokes about that famous line “What am I, chopped liver?” But seriously, these popovers aren’t very hard to make and also fun to eat with our without a filling. I feel like I’m eating a piece of happiness, LOL. 😀

By the way, here’s the video on how to make these:  http://www.marthastewart.com/244664/passover-popovers